Click here or press the Escape key to leave this site now
Home|News/Blog|How are we normalising stalking?

How are we normalising stalking? 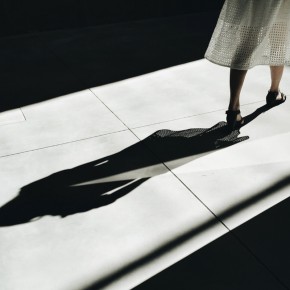 It is perhaps because stalking is a phenomenon commonly linked with celebrities that we don’t recognise it when it happens to those around us. There are plenty of examples of high profile individuals who have been stalked by delusional people pursuing an imagined relationship. Often these cases are also associated with violence, sexual assault and even murder.

The reality is, however, that the vast majority of people who find themselves being victimised by a stalker are not celebrities or individuals in a position of power. Similarly, although we can never discount the potential or risk of violence, many targets of stalkers never experience physical or sexual violence but instead endure personalised and intimate emotional and psychological torture.

Our recognition of stalking is also limited, perhaps more significantly so by our cultural beliefs and practices. Many of the individual behaviours that contribute to a threatening and frightening course of conduct can look like unrequited love, romantic gestures or someone finding it difficult to let go of a loved one. Consequently, the majority of these behaviours are unrecognisable to others as being threatening, frightening or distressing, and in fact can appear to be completely ‘normal’. They can be things that most of us experience on a daily basis – phone calls, text messages, ‘likes’ on our Facebook page and even ‘expressions of love’.

Many may never see their stalker and some won’t know who it is that is stalking them, but they will be deliberately and strategically made aware of the threat that hangs over them in a series of coded messages. This lack of visibility in either the form of physical injury or presence of the perpetrator means individuals are unable to demonstrate the definitive evidence required by the criminal justice system to access appropriate intervention and justice.

Our gendered assumptions and expectations of what is ‘romantic’ and our binary expectations of how ‘men’ and ‘women’ should behave are reinforced constantly. Stereotypes of masculinity and femininity define our popular media. Many of our most well-known, supposedly romantic, pop songs embody stalking behaviour. Perhaps the best example is ‘Every Breath You Take’ by the Police:

“Every breath you take, every move you make … I WILL be watching you.”

Not so romantic when you think about it. 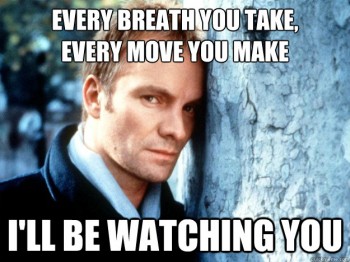 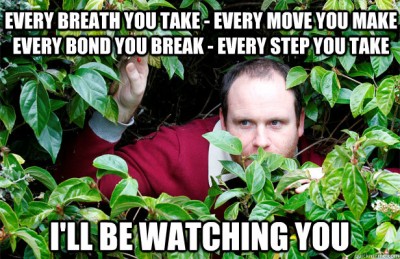 Similarly, stalking behaviours are framed as romantic in even more mundane popular culture, such as adverts. I imagine that a number of people who are reading this blog won’t remember the Milk Tray adverts of the 70’s and 80’s. Their advertising campaign framed the gesture of giving a box of Milk Tray as the height of romance that all women would want. A strong, classically good looking man, dressed in black, fought through all manner of dangers with the sole purpose of delivering his intended her favourite box of chocolates. The box was left in her bedroom, with an anonymous card, for her to discover.

The message implicit in the man’s actions was ‘I will do anything for you, no cost is too great’. Who wouldn’t fall in love with that, right? There are many more contemporary examples we can think of. Well, the alternative interpretation of those adverts is: ‘it doesn’t matter where you are, what you are doing or who you are with, I will find you’. Nothing about that says ‘romance’ to me. Nothing about that says ‘I want to love you and respect you and have a healthy, equal, relationship with you’. To me, the message is: ‘I want to FRIGHTEN you, I want to CONTROL you and I want your life to revolve around me. Failure to conform will result in severe punishment and, don’t forget, no cost to you is too great for ME’. This is the reality that thousands of people are living with minute by minute, day by day often for years at a time.

"... persistent behaviours, that don’t have
an explicit or obvious threat, are very easy
to explain away, minimise and ignore by
even those closest to a victim of stalking."

The message we receive about romance from films, music, television and all our other media is predominantly ‘persistence pays off’ and so persistent behaviours, that don’t have an explicit or obvious threat, are very easy to explain away, minimise and ignore by even those closest to a victim of stalking. For the target of a stalker this means that trying to convince a friend, family member or even the authorities that they have legitimate reason for living in fear can be a nearly impossible task. So how are we meant to get help if we have no evidence of threat and we can’t make people believe us?

What does the law say about stalking?

The Criminal Justice and Licensing (Scotland) Act 2010 took important steps to recognise and remedy the difficulties inherent in establishing, legally, that an individual is being victimised by a stalker. By defining stalking as a course of conduct (that is, 2 or more incidents), the need to corroborate each reported incident (a standard demanded by Scots Law for other crimes) with a second piece of evidence was removed. Instead, circumstantial evidence can contribute to demonstrating a course of conduct. But even then, showing beyond reasonable doubt that you are being stalked can be difficult – especially when you are dealing with stress and terror that a stalker can induce. That’s where FollowIt App may be able to help.

How can technology help?

FollowIt App was developed by the Scottish Women’s Rights Centre and media co-op and it allows someone to record the details of every incident with a time stamp, as it happens. In addition, it encourages you to record how the incident made you feel, and why and the actions you took afterwards. This means that not only are you recording the course of conduct that you are experiencing in a chronological and systematic way, but also its impact. Both the course of conduct and the impact are crucial criteria in the legal definition of stalking.

Your records are stored confidentially in the app, with a password and in an extremely secure server. If you lose your phone, you can still get to your records. The app itself is labelled as something innocuous so if anyone looks at your phone they won’t know what it is. And, there’s no obligation to give the information to the authorities – you can use the app as a therapeutic tool. However, if you decide to go to the police at a later date, it’s all there to show them, literally at the touch of a button.

If you want to learn more or you are ready to download the app, visit FollowIt App's website.