Click here or press the Escape key to leave this site now
Home|News/Blog|Me, I have a voice

Me, I have a voice 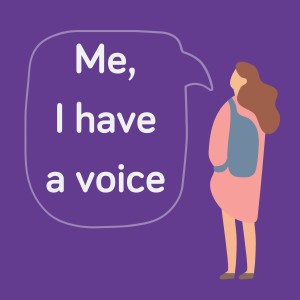 In this blog we share the powerful account of a survivor who endured years of sexual harassment from her male work colleagues. Her testimony brings to light the many obstacles she faced to report the perpetrators and put an end to the abuse, as well as the emotional impact on her life and the journey to heal from this devastating experience.

Content warning: this story includes descriptions of physical and sexual harassment, suicidal thoughts, depression, and references to domestic abuse and sexual violence. You can find details of support services here and at the end of this blog post.

It has taken me a long time to gather the courage to write about the nightmare that I have lived in for so many years. I thought that if I remained silent it would get easier and eventually I would be able to lead a normal life.

I believe that work is where you should feel safe to earn a living. I loved my job but not the place. My place of work felt like I had just walked into another domestic abuse situation, only this time there was not one abuser, but many.

For years, I was the victim of misogyny, racism, victimisation and discrimination in my workplace. I experienced physical and sexual harassment at the hands of my male colleagues and suffered systemic institutional harassment to the point that I wanted to take my own life.

Because of what I endured, my mental health and wellbeing were never the same again. I did not feel in control of my life and instead I felt too weak to fight the abuse. It was as if I was an ice sculpture slowly melting away, and to speed up the process, they chipped away at me.

My colleagues’ abusive behaviours felt like physical punches coming at me one after another, and it took its toll. I compare this situation to sitting in the same room with a rapist because a rapist’s presence alone can make their victim feel vulnerable.

I am a survivor of domestic abuse and rape. I spent a number of years in a very difficult marriage. After some time, I sought the help of my local Women’s Aid group who helped me learn to love myself again and gave me the strength to walk away from this relationship. I put myself first and I learned to love life.

Years later I accepted a job in a place where I believed I could have a brilliant career. Soon I learned that this was an illusion I alone shared.

As soon as I started the job, the abusive behaviours began: my personal items were thrown to the trash and my male colleagues aggressively told me what I could do and couldn’t do in the office, making it clear they resented my presence. Meetings were scheduled with one of the men who took great delight in intimidating and belittling me. Afterwards, the abuse only escalated.

Although I saw myself as equal to all the men in the office, they quickly made me feel I was worthless because I was a woman. I was told that I would never be accepted or wanted; they mocked me on woman’s issues and told me I had to learn how to speak properly because I had a different accent.

My male colleagues constantly belittled and insulted me and called me names. To add to the humiliation, they would frequently ask me to do things for them as if I was their servant. I was so intimidated that I felt I had no choice but to put up with whatever they said or did.

In the midst of this hostility, I worked hard to prove myself, but nothing I did was ever right. My work was scrutinised and micromanaged by male managers more senior than required. Once, when I verbally disagreed with a senior manager, he threatened me with physical violence. This treatment was so humiliating, and yet, other male colleagues sat there and did nothing.

The abusive behaviour was not only directed at me. The men in the office would also insult and ridicule other female colleagues by making explicit sexual remarks and comments about women and girls. As I suffered and witnessed all of this abuse, I continuously reported the incidents to human resources. Yet, it fell on deaf ears, and instead I was branded a serial complainer.

The atmosphere continued to worsen, until I witnessed a male colleague attempt to physically assault another woman in the office. This petrified me and I feared for her safety and mine. I had lived this abuse in my marriage and now I was seeing it over and over again at work. This prompted me to report the incident to my trade union. Fearing there would be repercussion, I asked to remain anonymous. To my shock, within a couple of weeks everyone at work learned from a senior manager that I had reported the incident. From that moment, the abuse I already suffered increased tenfold.

It was my trade union who gave me the help and support that my employer failed to offer. The union representative accompanied me to all meetings and disciplinary hearings raised against me after speaking out. They acted on my behalf to stop me from being abused within my workplace and provided legal counsel when appropriate. The union became my lifeline because it is difficult to do all of this alone.

Throughout this experience, I was one woman trying to stand up for herself and other female colleagues in an extremely poisoned work environment. The abuse I received at work drained the life out of my body. I could no longer stand looking at myself in the mirror because I did not like what I saw. If I once felt like a strong and beautiful woman, now all I could see was someone who had aged and was broken beyond repair.

In the mornings I would wake up not wanting to get out of bed — many times I didn’t. I did not wash or brush my hair nor could I remember the last time I brushed my teeth. I used to take pride in my appearance and now I hardly recognised myself. I also stopped cleaning the house and I did not cook. I withdrew from my friends and family and hid away from the world. It was very difficult to be amongst crowds and I became scared of my own shadow. I did not know who to trust anymore and I felt there was nowhere to turn.

Despite my many reports, my employer warned me not to speak about any of the incidents. This left me voiceless, unable to share what was happening to me. I felt alone — left in a dark, black hole. I was sinking, further and further down I went. I wanted a way out — I literally wanted to die so I could not feel any more pain. They made me feel like I was a failure to my family, friends, co-workers and to myself. This became a shame that I desperately struggled to live with.

It took a long time but eventually, little by little, I began to open up to my family. I thought they would be disappointed with me, but they embraced me with love and stood by my side. With time, I spoke to my GP too, she was very understanding and set up the medical support I needed. I engaged in counselling and I opened my heart to God — religion has always been very important to me and somewhere along the way I went off path.

I did not realise just how much help was out there until I started looking. There are so many more woman who are going through the same experience I have, and yet I thought I was alone.

I don’t want other women who are being harassed at work to read my story and think that they cannot speak out or do something about the abuse just because of what happened to me or to them. My suggestion is that you speak to someone, record everything, keep note and talk to your union. If you don’t have a union, considering joining one.

I also want you to know that you are worth so much more. No one, whether it is at home, at work or anywhere else, has the right to disrespect you or to cause you any harm. When you tell someone to stop and you say no, they must respect your wishes. You are important and deserve respect. Above all, you are not the one who should feel ashamed.

I have learned to forgive so I can move on with my life, and it has been a very difficult process, but with the love of my family, friends and the support of my trade union I am doing this day by day. Abuse at work is a heavy burden to carry on your own. You can regain control of your life and make it clear that they will not abuse you anymore.

For a long time I was made to feel that I was responsible for what happened to me, that I had asked for it. The worse my male colleagues treated me, the harder I tried to be accepted. I would go out of my way to do things for them thinking that I could win them over and they would then treat me better. It took a very long time before I realised that I am better than that and they are not worth it. It was with counselling and organisations such as the Scottish Women’s Rights Centre and Rape Crisis Scotland that I have learned how important I am.

My mental and physical wellbeing have suffered because of this experience. I have PTSD because of what was done to me, and today I am getting the help I need. I have the support and love of my family and friends, which makes me stronger every day. It has been a long journey, but I know now that I am not alone. You are not alone and you are not weak if you ask for help. You are brave, strong and you are beautiful. You have a voice.

We have a voice.

If you've been affected by the contents of this story, please know support is available: