Click here or press the Escape key to leave this site now
Home|News/Blog| Rape culture in education: what is it and how can we end it?

Rape culture in education: what is it and how can we end it?

This blog will consider:

Sexual misconduct is widespread in further and higher education.

Research carried out by the National Union of Students (NUS) found that:

A study carried out by academics from the University of Kent in 2019 also found that:

The study also highlights that there are a range of indicators which reliably predict sexual misconduct, including hostility towards women and the acceptance of myths around rape - for example, the myth that a survivor can be held partially responsible for an experience of sexual assault because of what they were wearing or how much alcohol they had consumed. Survivors are never responsible for experiences of gender-based violence, and to blame them perpetuates rape culture.

What is rape culture?

Although some people might consider that a sexist joke or a joke about harassment or domestic abuse is harmless, it is not. ‘Low level’ acts of misogyny contribute to a culture where sexist behaviour and gender-based violence are normalised. A joke about sexual assault trivialises it, and makes it seem less serious.

Excusing comments or jokes made about gender and sexuality and gender-based violence as ‘locker room talk’, or saying things like ‘boys will be boys’ perpetuates a culture where gender-based violence is tolerated, as laughing off violence normalises it and makes it seem more acceptable. This is known as rape culture.

This kind of attitude also leads to victim-blaming and belief in rape myths. The study cited above found that believing in rape myths is a reliable predictor for committing sexual violence, and that tolerating jokes and ‘locker room talk’ can lead to instances of violence.

The pyramid of rape culture below shows how accepting ‘low level’ acts such as jokes or negative comments which may seem innocent - but are unacceptable - can allow behaviours to escalate to rape and sexual assault. 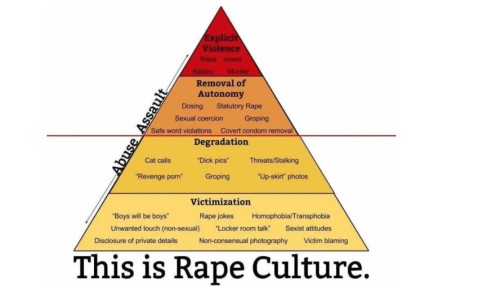 At the SWRC, we approach gender-based violence with a feminist analysis. This means we see gender-based violence as both a symptom and a cause of gender inequality. In a patriarchal society, women, trans people and non-binary people are marginalised, and men generally have more power. As a result of this power imbalance, it is easier for men to perpetrate abuse against women and other marginalised genders, and to avoid persecution for this, due to their relative power.

This means that as much as we do to help individual survivors of gender-based violence, it won’t end unless there is a culture shift. We can all help make this happen by disrupting rape culture. Recent campaigns such as ‘Don’t be that guy’ from Police Scotland and ‘Have a word with yourself’ from the Mayor of London highlight the role we can all take by calling out friends or our own behaviour. This could involve telling someone that jokes demeaning women or about sexual assault aren’t funny or intervening when a friend is behaving inappropriately towards someone else. It may not feel safe to talk to someone directly, but there are other options such as asking a trusted mutual friend to say something, or telling a respected figure such as a lecturer or coach.

How we can help

If you have experienced sexual harassment while at college or university, our solicitors can provide you with information and advice. To request an appointment, please call our helpline.

Our helpline is currently available at the following times:

- Tuesdays between 1PM and 4PM

- Wednesdays between 10AM and 1PM

Important: from 10 January 2022 our helpline is temporarily moving to a new format. You can read more about these changes here.